Support Portal  »  Knowledgebase  »  Viewing Article
Print
Customers who upgrade Java on the PC's they use to connect to the Raritan Multi Platform Client (aka "MPC"), may have noticed difficulty connecting to the KVM over IP units.  Customers will be unable to connect to the device, but will not receive a message indicating the username/password was rejected, instead only receiving a connection terminated screen, IE: 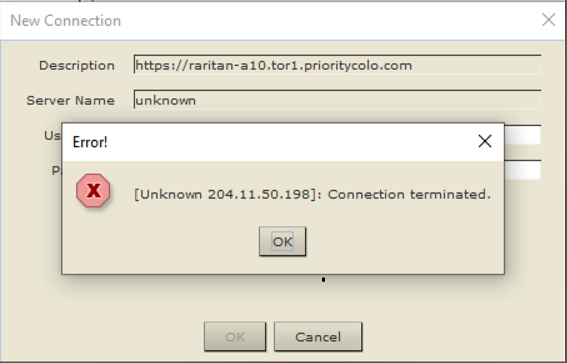 This is due to Java disabling default support for TLS1.0 as of Java release "8u291".  The Raritan DKX2 units rely on TLS 1.0 to connect between the Java client, and the hardware KVM servers.  Unfortunately the DKX2 based KVM's are running the latest firmware (and do not have built-in support TLS1.2/1.3).  The java release notes for "8u291" indicate this change:


While customers can remedy this by downgrading Java on the host to Java release "8u281" or earlier, and everything will work again as expected, this may pose other issues (depending on what else uses Java, or security policies that need to be adhered to, etc.).

#2 - Locate the "Java.security" file - this file will be installed where Java has been installed.  On Windows 10 machines (as an example), this file will be located under: "C:\Program Files\Java\[java release version]\lib\security\java.security", on MacOS the user should use the finder tool to locate said file.

After both steps #1 and #2 have been completed, any known/current version of Java should be able to connect to the Raritan DKX2 KVM over IP dongles, VIA the Raritan MPC once again.  No additional intervention/changes should be necessary beyond this point.